Apart from the well known historical cities such as Florence, Siena, Pisa, Lucca, Tuscany features lots of walled hamlets, castles, abbeys on the hilltops of vineyards, olive groves and secular trees, which witness centuries of their history. 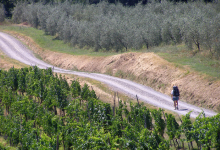 From Gambassi Terme begins a stage of 13.4 kilometers that complete in about 3 hours of walking. A short route, interesting for the beauty of the ridges of the Val d'Elsa, littered with castles and abbeys, originated by the passage of the Via Francigena. The journey ends in the charming San Gimignano.

The suggestive medieval hilltown of San Gimignano provides a stunning sight from miles around with the incredible profile of its towers above the Elsa Valley. Among the many places worth seeing is the Dom, the City Palace, the Museum of Sacred Art, the Archeological Museum, and the Church of S. Augustine.
Well-known for the delicious Vernaccia and for the safron growing which dates back to the Meddle Age, San Gimignano is undoubtedly an architectural jewel.

Hometown of the famous Tuscan novelist Giovanni Boccaccio, whose Decameron marked the development of the Italian language, Certaldo still features a walled Medieval hamlet with its crenelled towers, churches, palaces ant the typical narrow alleyways and prisons.
A real journey across the time to enjoy getting up to the hilltop by a funicular or simply walking on the steep paved streets of Costa Vecchia or Costa Alberti.

The Franciscan monastery of San Vivaldo, so named after the saint Vivaldo was found dead in a chestnut he had chosen as his home, recreates the sites of Christ's Passion, which had a great importance for the Christian World of East Europe.
Declared National Monument, the Monastery feels very wild and romantic and suggests a mystic atmosphere of loneliness and prayer. 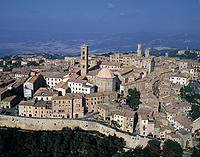 Situated on a hilltop over the confluence of Cecina and Era Valleys, at about 541mt. above sea level, Volterra enhanced from the Neolithic the first settlements.
The town features plenty of ruins revealing the 3000 years of history, most dating back to the Etruscan and Medieval period.

X Informative - This site uses cookiesincluding third parties for Optimize the user experience while navigating and enable basic functionality; collect anonymous statistics; Profile the user to send him advertisements in line with his preferences.; offer additional features such as maps and social widgets
Click here to deny your consent. If you want to know more or deny consent to all or some cookies Click here.
If you do one of these things, you agree to the use of cookies: Click on button 'OK' on banner; Cliccare on button 'Activate cookies' inside blocks; Scrolling the window; Closing the banner.
OK